A Call to the Cosmic Complaint Department… 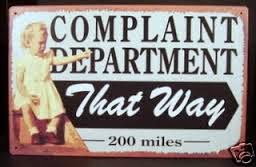 Well, if you’re listening, I think there’s been a terrible mistake. You see, I’ve got this, well, this creeping paralysis, and it just won’t stop creeping… and creeping… and creeping. It’s creeping so much that it’s creeping me out, and I’m afraid it’s about to swallow me. So, before things get completely out of hand, I’d like to lodge a formal complaint and see if I can get some kind of a cosmic credit, or even maybe a do-over. You know, like back in the schoolyard, when in the middle of a game something would go wrong and all the kids would agree to just wipe the slate clean, and make believe that whatever happened never happened. Do you think we could work something out along those lines? A do-over? Just one?

The department store Nordstrom is famous for taking back almost any item, even if it’s been used, and I’m thinking I must be due some kind of refund or other form of galactic recompense. I mean, if Nordstrom can do it, certainly you, a universe filled with multiple dimensions and all kinds of crazy quarks and pulsars and quasars, must have some way of correcting what has obviously been a royal screwup. No, I don’t have a receipt, but I do have a birth certificate and an expired driver’s license, will that do?

Because, really, I’m pretty sure this isn’t the way things were meant to play out. I’m fairly certain that somewhere along the line the story of my life has gone way off script, like in one of those old movies where somebody accidentally picks up the wrong suitcase at an airport or train station and their fates get switched with the person who picked up their suitcase, and all sorts of wackiness then ensues. I’m positive that somehow my cosmic suitcase got switched, and I’m not at all happy with the ensuing wackiness.

When I was younger, I had a preview reel of what my life would be like running through my head, and I’m certain that literally feeling sick and tired all of the time while becoming ever increasingly paralyzed wasn’t in any of the selected scenes playing on an endless loop in my noggin. I was going to be a famous writer, rock star, or movie director, and my life was supposed to be filled with all kinds of exciting escapades and adventures, with just enough drama thrown in to make things interesting. I wasn't expecting a fairytale, but the screen in my head wasn’t showing a disaster flick, either.

Yes, yes, I know, all of that might seem ridiculous and downright juvenile, but I never claimed to be the paragon of maturity. After all, you’re only young once but you can be immature forever, right? And yeah, I’m well aware that almost no one’s youthful dreams ever really come true, but I never ever imagined that dreams could so easily turn into nightmares. Looking back I’ll admit that I didn’t always make the best choices, and probably made more than my share of mistakes, but surely I never did anything bad enough to deserve this, did I?

I mean, I just watched a television interview with the serial killer Son of Sam, who slaughtered six people and terrorized New York City for months on end back when I was a teenager, and he looked healthy as a horse sitting there in prison. Doesn’t he deserve a nice dose of creeping paralysis? Or how about the monsters who rape or hurt children, or plot horrific terrorist attacks that kill dozens or hundreds of people? I see them on the news all the time, looking all hale and hearty. How about a liberal sprinkling of progressive multiple sclerosis for them?

Believe me, you don’t have to tell me that I’m no saint, but even with all of my missteps and blunders and mistakes, the person I hurt worst of all most often seems to have been myself. Being sick has given me all kinds of time to look back and analyze my past, and at this point I think my regrets have regrets. I’d love to be able to use some of the insights all of this introspection has given me to live a more worthy life and forge a future free of the dunderheaded moves of my past, but the way things are heading if I think too much about my future I might just poop in my pants. As a matter of fact, without being granted a cosmic refund or credit or do-over, pooping in my pants could very well be a large part of my future. Gross. And things could very well only go downhill from there.

I’ll admit that getting sick hasn’t been all bad, and in some ways it’s given me freedoms that I probably otherwise never would have realized. I was able to stop working and start writing, which is probably what I should have been doing all along. Before this creeping paralysis crept so far I was able to take lots of photos and videos from my wheelchair, fulfilling creative impulses I’d long dreamt of indulging (without the wheelchair part), but I’m afraid those days are probably over. I sure have learned a heckuva lot and met all kinds of interesting people, many of them fellow patients, most of whom, FYI, also don’t deserve the crap they’ve been slapped with. It would be nice, Mr. or Mrs. Cosmos, if you could find a way to cut them more than a little slack, too. I’ve discovered emotional and physical resources within myself that I didn’t know existed, which has been kind of cool. But now things are getting pretty dicey, and I think I’ve squeezed all the positives out of this experience that there are to be squeezed. In all honesty, I’m getting scared. Really, really scared.

So what do you say? Can you give a brother a break? How about this: forget about making me better, just stop me from getting any worse, okay? Certainly not the ideal situation from my perspective, but I’ll take it. How’s that for a compromise? See, I’m reasonable, not like all those asshats in Washington. Can’t we work something out? A little give-and-take? I’m not sure I have all that much left to give, but I’m open to suggestions. I’ll be right here waiting for your answer, just a pimple on a flea’s ass in this ever-expanding universe, but I trust that you’ll know where to find me.

Posted at 12:41 AM
Email ThisBlogThis!Share to TwitterShare to FacebookShare to Pinterest