A few months ago, I received an e-mail from a very old and dear friend of mine, a guy I first knew from the days I spent as the lead singer of a punk rock band in Boston, back in the mid-1980s. He was a guitar player in the band, and along with the e-mail came a series of photos of me taken by a mutual friend, sometime in 1986 or 1987, best that I can figure. I have a kind of hazy recollection that these pictures were shot during some all night party, but I'm really not sure. Regardless, seeing them set off a mixed up jumble of emotions and feelings as I stared at images of a young me who had no way of knowing what the coming years would bring. 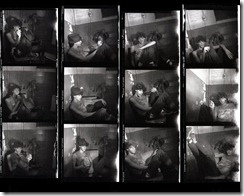 Portraits of the Kamikaze as a young man . Click above for larger image .

My first reaction to seeing the photos was, "Gadzooks, was I skinny!" Of course, I do remember that I was a skinny guy, but time did a pretty good job of making me forget just how skinny I was. Good thing I didn't stand up and turn sideways in those pictures, or I would've been invisible. I think I was the first "stealth" human...

After I got over the skinny shock, I started contemplating the huge gap between what I'd expected of the coming years, and how things actually went. The preview clip that ran in my head back then bore little resemblance to the actual movie that eventually played out. I honestly believed I'd be a rock star, or, failing that, a famous novelist or maybe even an actor. Of course, in order to be a famous novelist or actor one must at least make an attempt to write or act, petty details which I conveniently chose to ignore, but that didn't phase me. I was certain that destiny had great things in store for me, and that I needn't bother myself with making much of an effort to do anything, that it would all simply fall into place. I think the expression "had his head up his ass" pretty much sums it up.

I certainly never in my wildest nightmares imagined that I'd be dealing with a chronic degenerative nervous system disorder at age 46, the disease relentlessly whacking away at me, taking no prisoners and showing no mercy. Now, looking at pictures of me two decades past, from the unexpected vantage point of a wheelchair, I felt overwhelmed with the desire to somehow reach back through time to deliver some measure of wisdom to that skinny kid, to make him understand just how precious and fleeting everything he was taking for granted really was.

Back then I was nobody's angel, and got into more than my share of shenanigans, but never at anybody else's expense, if I could help it. I'm sure I wronged some people along the way, but even at my wildest I tried to be a good guy. In fact, looking back, I don't regret anything that I ever actually did, but I do regret so many of the things I didn't do. I was so caught up in my hipster brew of existential angst and bohemian brooding that I never realized just how much fun I could be having. For a few years there, it was as if life was a never-ending series of parties. I worked as little as possible (just enough to cover rent and food), spent more time in bars and clubs playing pool and playing gigs than I did in my own bedroom, and inhabited a subculture that operated for the most part completely under the radar of mainstream society.

Instead of reveling in those days of counterculture freedom, I went out of my way looking for reasons to be miserable. Now, 23 years later, I can hardly even remember the sources of all of that misery and pain, and in reality most were mere trifles, bumps along the road that I managed to magnify into perceived catastrophes. I was a slave to my emotions, completely oblivious to the fact that our emotions are born of us, not we of them, and that we have within us the power to harness our emotions and thus create our own realities.

Most of all, I'd like to scream at my young self to live life "con mucho gusto", to not let fear and insecurity hold you back from experiencing all the pleasures, surprises, and ecstasies that this brief stay on Earth has to offer. The power and majesty of youth lies in the infinite possibilities of the road about to be embarked upon, a path defined by our own decisions and, very often, by sheer luck, both good and bad. How we choose to characterize what happens to us is what separates success from failure, triumph from disaster. It is the length and breadth of those experiences that make up the vivid tapestry of a life, and all too often our fear of the negative can impede our experiencing the positive; the walls we erect to keep out the hurt can also serve to hold back the wonderful.

All but the most blessed of lives are filled to the brim with things that just plain suck. Heartbreak sucks, financial problems suck, betrayal sucks, unfulfilled dreams suck, the compromises we make just to get through each day sucks. People dying sucks, losing sucks, and getting MS sucks. I don't even have the words to describe how just hard getting MS sucks. But we must not get stuck in the suck, lest we lose the ability to appreciate of all the good that still surrounds us, from the love of those held dear to the simple pleasures of a favorite lyric or the occasional tranquility of solitude.

All of us, sick or well, must leave ourselves open to madder music and stronger wine, to cry out for it, to exult in the knowledge that despite all of the hurt we've experienced and all of the burdens we've been made to bear, we have it within ourselves to summon forth joy, to make the conscious choices that allow us to transcend the bonds of illness and sheer misfortune, to triumph in spirit if not in body. There are days when the climb is too steep, when the path is temporarily impassible, and it's okay to sometimes wallow, to allow the occasional fit of self-pity. But what I didn't see as a young man was that the key to contentment lies not in the external but in the internal, and that circumstances be damned, happiness comes to those who choose to be happy, who can find joy not because of their station in life but in spite of it.

Oblivious to the fact that 20 years hence I'd be struck with an illness that insists on limitations, I conjured up limitations of my own. Such is the folly of youth, but all too often I see in my grown-up friends and family that same predilection for self defeat. I suppose each must learn their lessons in their own time, but if my illness can serve any purpose, I'd like it to impart this lesson on those who've come to know me:

Posted at 2:52 AM
Email ThisBlogThis!Share to TwitterShare to FacebookShare to Pinterest