A Patient's Perspective on CCSVI, in Words and Pictures (Part Three)

On July 15, 2011, it was my honor to give a presentation at the Patient Information Day of the Second Annual CCSVI Update Symposium, held at the Crowne Plaza Hotel in Times Sq., New York City. The organizer of the symposium, Dr. Salvatore Sclafani, asked me to write an essay for oral presentation on "A Patient's Perspective on CCSVI", using some of the photographs taken from my wheelchair mounted camera to illustrate my talk. I'll post the resulting essay here in four parts, spaced a few days apart. Here's part three (click here for part one or here for part two): 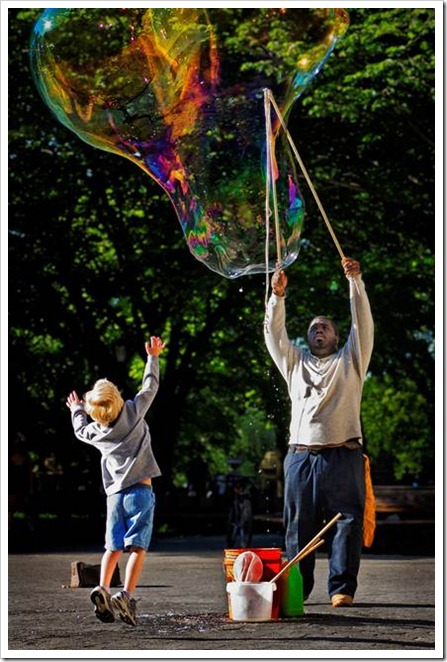 This is a photograph taken in Central Park, which is a photographer's paradise. The man making the giant bubbles is a fixture in the Park, spending countless hours on sunny days creating colossal bubbles, much to the delight of children and adults alike. Kids invariably flock to him at the sight of his fantastical creations, intent on grabbing hold of that which could never be caught.

Shooting photos of the action surrounding the bubble man, I'm always struck by the wonderful innocence of childhood, when all things seem possible, even the improbable act of catching a giant iridescent bubble. At their apex, floating free, the huge bubbles do indeed for several moments assume an appearance of shaky permanence, almost like airborne jellyfish, only to inevitably burst in a shower of soapy water a few short moments later. Undeterred, the children try ever harder to catch them, taking delight even in their repeated failures at the giddy but impossible task at hand.

When healthy, I think many of us were very were much like these children, taking for granted the foundation of our daily lives, which seemed as solid as concrete, but which all too soon proved to be as transient as a huge soap bubble. At the moment of diagnosis, the childish notion that the arc of our lives would forever be strong and true came to a jarring end. The future that we had long imagined for ourselves, a precious bubble of dreams, suddenly burst by a torrent of words spoken across the desk of a physician. At some point in the past, none of the patients reading these words, or their loved ones, ever imagined that they would be one day be confronted with the scourge of disease, desperate to find relief and salvation, seeking to educate themselves and inoculate their spirit with a much-needed injection of hope.

The trauma of diagnosis is often followed by creeping disillusionment, as the realization that that shiny miracle machine known as modern medicine, with its wondrous high-tech devices and endless stream of headline worthy breakthroughs, is itself just another soap bubble, the illusory nature of which is only revealed once you are forced inside the belly of the beast. As the writer Gertrude Stein said, when you get there, there is no there there. No surety, no answers, and certainly no cures, at least not for this thing called multiple sclerosis.

But, through sheer strength of will, we not only survive, but thrive in spite of the disease. MS can take many things, our careers, our relationships, our mobility, but it can never ever touch the spirit within, unless we give it permission. And that is a permission that should never be granted. We fight back, with determination, education, and a big iridescent bubble called hope.

CCSVI has for many provided that hope, and in turn, for some, that hope has been transformed into actual progress made against the disease. There are still many obstacles to the hurtled, many chasms to be crossed, but momentum is building. The true nature of CCSVI and its place in the MS puzzle probably lies somewhere between the panacea envisioned by those most optimistic and the fool’s errand it's been labeled by its staunchest naysayers. But research into CCSVI has already wrestled the stubborn attention of some experts away from the party line of autoimmunity, and the power of educated patients is changing the patient-doctor dynamic from dictatorship to partnership. Never stop reaching for bubbles, my friends, someday they will be held in our arms.

Posted at 11:29 PM
Email ThisBlogThis!Share to TwitterShare to FacebookShare to Pinterest