Some New Photos, With a Twist 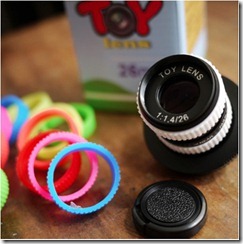 I've added some new photos to the Wheelchair Kamikaze photo gallery, but these are a little bit different than any of the other shots found there. Back before my neurologic difficulties robbed me of the ability to hold a camera to my eye (click here to see my wheelchair mounted camera set up), I loved taking photos with antique and toy cameras. Because of the decidedly low-tech quality of the optics used in many of these cameras, the images they produced had a surreal quality to them, almost like snapshots taken from a long-ago dream. I used to scour eBay listings, flea markets, and yard sales for cheap relics that were still in working order, knowing that each one would have its own unique but endearing quirks. Of course, none of these cameras were digital, and all used traditional film, which further makes them impossible for me to now use, as loading film with my one wonky but still working hand would be quite the achievement.

Within two years of my diagnosis I was no longer able to hold a camera to my eye and had to sadly give up my yen for photography. I bitterly thought my photo days were over, until my disease progressed to the point where I needed a wheelchair. Once I got the electric beast, and embraced the freedom it allowed me, my wife insisted that I try to figure out a way to rig a camera to the chair, and pressed the point home by getting me a suitable camera and camera mounting equipment one Christmas. I was quite resistant to the idea at first, I think because I was afraid the results would not be up to snuff, and would only serve as evidence of just how much I'd lost to my illness. After a couple of goes at it, though, I found that the photos I took in my new, somewhat unwieldy manner actually weren't all that bad, and realized that once again I was back in business. Of course, the antique and toy camera fetish was out, as the only cameras suitable for my new set up were high-tech digital beasties, but, as they say, any port in a storm.

Lo and behold, a couple of months ago I discovered that there were some decidedly low-tech lenses available to be mounted on my high-tech digicam. I warily ordered one, called simply the "toy camera lens" (click here), from an outfit in Hong Kong, half expecting my money to disappear into the ether. Incredibly, three days later (!) a package arrived from Asia, containing my wonderfully cheapo new lens. It's a really strange creature, with an area of sharp focus in the center, surrounded by increasingly swirly and out of focus edges. It's kind of temperamental, and I'm still sussing out the best ways to utilize its eccentric charms. There's no autofocusing the thing, you actually have to focus it by hand, an old-school exercise that I somehow find very satisfying, even though it increases immensely the complexities of trying to take a photo with only one coopertive hand.

So, presented for your perusal are the following photos, all taken with my new toy camera lens. I'd really appreciate some feedback on these, as I'm pretty sure they won't appeal to everyone, but I think some will find their dreaminess appealing, and hopefully see something striking or compelling in them. If not, you have permission to tell me I'm nuts. Honestly, I'd love to hear all opinions, good or bad, so feel free to leave comments positive or negative, as all will be valued.

Posted at 1:27 AM
Email ThisBlogThis!Share to TwitterShare to FacebookShare to Pinterest