Please Stand By (and a hooray for me)

My apologies for the lack of a recent post, but my peculiar flavor of creeping paralysis has been especially troublesome of late, and I’ve been spending the bulk of my time in bed. I’ve also been dealing with what seems to be my own special version of the “post-lumbar puncture headache”, which in my case has manifested as extreme dizziness and nausea every time I assume an upright position. It seems that for whatever reason nothing about my disease ever stays on script, and even when I get a lumbar puncture headache it doesn’t present as a headache, but rather the aforementioned dizziness/nausea, making things much more confusing than they need to be. I’ve never minded that I've always marched to the beat of a different drummer, but the fact that my disease has decided to march to the beat of an entirely different symphony orchestra is really starting to bug me.

I needed the lumbar puncture as part of a diagnostic test called a cisternogram, done because of some recent suspicions that I might have a cyst pressing on the base of my brainstem right where my big, juicy, so-called MS lesion sits. Of course, if such a cyst did exist, it could be a game changer, and might explain much of the strangeness surrounding my illness. Getting rid of it would require some tricky open skull surgery that could be potentially dangerous in and of itself, but removing the cyst, if it actually were there, would likely have a very positive impact on my neurologic condition.

The cisternogram involved getting an injection of a contrast agent directly into my spinal column (hence, the lumbar puncture), followed by a series of CT scans, which would show the alleged cyst much better than a standard MRI. During my nearly ten year MS (or whatever it is the hell I have) career, I’ve literally had over twenty lumbar punctures (both for diagnostic and treatment purposes), and have had very little problem with any of them. In fact, I’ve often said that I’d rather have a lumbar puncture then dental work. Unfortunately, this time around, I’ve been zapped with post puncture putridity, which finds immediate relief when I relent from any efforts to achieve an upright posture and resume lying in a horizontal position. If the situation persists past this weekend, I’ll probably need a blood patch (click here) to seal the pinhole in the lining of my spine, but I’m hoping to avoid that, especially since Hurricane Sandy should be hitting here sometime Monday/Tuesday, making getting to the hospital for the procedure a bit of a hassle, to say the least.

Alas, initial indications are that the cisternogram did not detect a cyst, although I still need to do some final follow-up with my neurosurgeon. It’s very strange to find myself in the position of actually hoping for a brainstem cyst, the removal of which would necessitate getting my skull drilled open, but as distasteful as that prospect may be, it seems absolutely yummy compared to enduring the never-ending and increasingly disabling march of my disease progression. So, I’m pretty bummed that it looks like I don’t need delicate brain surgery. How’s that for a sentence I never thought I’d write?

On a much happier note, the fine people at BNAC (the Buffalo Neuroimaging Analysis Center) have decided to honor me and Wheelchair Kamikaze with a service award, which was presented on Saturday, October 20, at The Center’s “Brains and Gains” event (click here). The award is for:

"Service in advancement of the understanding of multiple sclerosis among patients worldwide through www.wheelchairkamikaze.com and contributions of The Buffalo Neuroimaging and Analysis Center as Advisory Council Member, donor and friend".

BNAC does cutting edge research on CCSVI and MS, as well as investigations into a host of other neurodegenerative diseases. I’ve been on the Patient Advisory Board of BNAC for about a year now, and was very surprised to be chosen for the award (and also quite chuffed, as my British friends would say). My heartfelt thanks go out to Doctor Robert Zivadinov, Doctor Bianca Weinstock-Guttman, Dean Michael Cain, the delightful Linda Safran, and the rest of the BNAC staff. The rigors of dealing with everything that comes with having a mysterious chronic progressive disabling illness have been getting kind of punishing lately, and word of the award was a wonderful surprise coming at just the right time. Muchas gracias, BNAC… 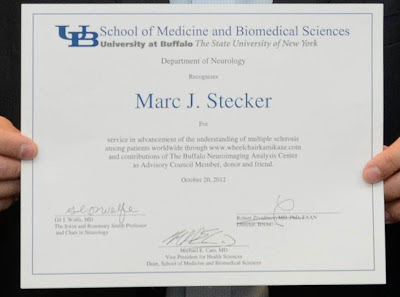 Posted at 12:07 AM
Email ThisBlogThis!Share to TwitterShare to FacebookShare to Pinterest