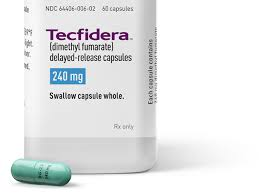 Last week, in disclosing the company’s quarterly financial report, pharmaceutical giant Biogen revealed that a patient taking its oral MS drug Tecfidera had developed the dreaded brain infection PML and later died of pneumonia (click here). This news understandably created much anxiety in the MS population, particularly among those patients currently taking Tecfidera and those considering starting the drug. Let’s take a careful look at the details of this unfortunate news and try to properly assess its impact.

In the roughly 18 months since it was first approved by the FDA, Tecfidera has become a blockbuster drug, generating nearly $2 billion in sales over the last nine months alone (click here). The tremendous financial success of Tecfidera is in large part due to its ease of use (it’s a pill), relatively high efficacy rates, and a perceived low risk of serious side effects. Until this case of PML was reported, the Tecfidera side effects receiving the most attention were flushing and gastrointestinal distress, both of which subside after 6-8 weeks in the majority of patients taking the drug. Obviously, adding the risk of PML to the equation could change this calculus significantly, so it’s vitally important to parse this new information as best as possible to try and appreciate the true risk posed by PML in the Tecfidera MS population.

It’s essential to understand just what is PML, and how Tecfidera’s mechanism of action might increase the risk of contracting the disease. PML (Progressive Multifocal Leukoencephalopathy) is an infection of the brain and central nervous system that is caused by the JC virus, a pathogen that is present in about 50%-60% of the general population (click here). Under normal circumstances, those carrying the JC virus are completely without symptoms and the virus is kept in check by the human immune system. In patients whose immune systems have been compromised (for instance, people with AIDS),  the JC virus can lead to PML, an infection that destroys myelin in large portions of the brain, leading to significant disability, and, in many cases, death. PML is a much-publicized potential side effect of the intravenous MS drug Tysabri, which profoundly suppresses immune system activity in the central nervous system of patients taking the drug, thereby leaving those carrying the JC virus potentially susceptible to the infection. This is why strict testing for JC virus antibodies has been instituted for all patients on Tysabri therapy. PML has also been seen patients with MS as well as other diseases taking other immunosuppressive drugs, as these drugs can, by their very nature,  compromise the body’s ability to keep the JC virus under control.

Tecfidera (whose chemical name is dimethyl fumarate) is purported to work through a variety of actions. The drug is thought to have anti-inflammatory and antioxidant properties, but studies have definitively shown that one of the drug’s primary actions is immunosuppression. In trials, Tecfidera was demonstrated to reduce the amount of lymphocytes (infection fighting white blood cells) by about 28% in treated patients (click here, the pertinent information is on page 9). While this level of lymphocyte suppression is not considered to put patients at any kind of serious risk, it could very well account for Tecfidera’s efficacy in treating multiple sclerosis, as the disease is, at least in part, driven by an aberrant immune response.

These same studies also found that about 4% (1 in 25) of patients treated with Tecfidera develop a more serious drop in lymphocyte count, resulting in a condition known as lymphopenia. Severe lymphopenia can indeed open the patient up to opportunistic infections, and for this reason FDA guidelines call for regular blood testing to monitor for the condition in Tecfidera treated patients (click here). Currently, the FDA suggests patients have their blood counts checked once a year, but in practice many neurologists are being far more diligent in testing their Tecfidera treated patients. This recent news about PML and Tecfidera could very well result in more stringent blood testing requirements, but even without such a mandate it seems wise that patients be tested quite regularly to check that their lymphocyte counts remain at safe levels.

Although there currently aren’t many available details on the PML Tecfidera case reported last week by Biogen, it is known that the patient in question had been on Tecfidera for nearly 5 years (she started taking the drug during the approval trials), and had been experiencing severe lymphopenia for 3 ½ years. Logic would seem to dictate that a patient be taken off the drug as soon as their lymphocyte counts drop into dangerous territory, so the fact that this unfortunate soul was left with severe lymphopenia unaddressed for years on end is, to my mind, completely inexplicable. Indeed, it would seem that given the circumstances, her neurologist was courting disaster. Again, I am basing this assessment on scant details, but I have a hard time imagining any scenario that would warrant keeping a patient on a medication that was suppressing their immune system to dangerous levels for such an extended period of time. If the specifics of the case are as originally reported, the fact that the patient was kept on Tecfidera for three and half years after she first tested positive for severe lymphopenia quite frankly boggles the mind.

If anything, this case would seem more to underscore the importance of diligent patient monitoring than any inherent potential danger posed by Tecfidera. Ceasing the drug in the face of troubling blood test results should be a no-brainer. Patients experiencing severe lymphopenia in the Tecfidera trials saw their lymphocyte counts increase significantly within four weeks of stopping the drug. It is currently not known how long is required for lymphocyte counts to return to pre-Tecfidera levels.

While it would be extremely concerning if the patient in question developed PML while her lymphocyte counts remained at acceptable levels, the facts as now known indicate that this simply was not the case. Given the immunosuppressive properties of Tecfidera, it would appear to be vitally important that patients be regularly tested to check their white blood cell counts. It would seem that the FDA suggestion of once yearly blood tests is insufficient, and I know many neurologists are checking their patients much more frequently, more on the order of at least once every three months. Monitoring for JC virus might make sense if PML were to be seen in Tecfidera patients not experiencing severe lymphopenia, but at this point the available evidence doesn't seem to merit the taking of this extra step. Then again, any extra bit of information is valuable, and I'd imagine that some neurologists might Institute testing for JC virus in their Tecfidera patients on their own. Tecfidera is proving to be quite effective in reducing relapse rates and the formation of new brain lesions when used to treat RRMS (click here), and with proper monitoring it would appear that the drug is actually quite safe.. Of course, the drug has only been on the market for a year and a half, and only time will reveal the true long term efficacy and safety of Tecfidera.

As this tragic PML case demonstrates, the fact that Tecfidera can induce severe lymphopenia in 1 out of 25 patients taking it should make both patients and doctors alike keenly aware of the need for proper blood count monitoring. Patients shouldn’t be shy about requesting such tests if their neurologists don’t currently require them. Knowledge is power, folks, and patients need to equip themselves as best as possible with the most accurate data available and take an active role in making treatment choices. The doctor-patient relationship should be a partnership, not a dictatorship. It’s terribly unfortunate that PML has entered the Tecfidera picture, but the case in question seems much more like the exception than the rule. This is not to say that this recent news shouldn’t be cause for concern, but it certainly shouldn’t induce panic among those currently taking the drug or those considering Tecfidera therapy.

It is my fervent hope that future MS therapies will turn away from immunosuppression and find some other more effective, more benign mechanism for fighting the disease. But, as the current crop of drugs are generating billions and billions of dollars in profit for the companies that make them, it will likely be quite some time before my hopes are realized. For now, it is imperative that patients as much as possible use their heads, and, armed with accurate information, work in tandem with their physicians to best beat back the beast that is MS. At this point, Tecfidera appears to be a valuable tool in this quest, but like all tools it needs to be used intelligently and with care.
Posted at 12:34 AM
Email ThisBlogThis!Share to TwitterShare to FacebookShare to Pinterest