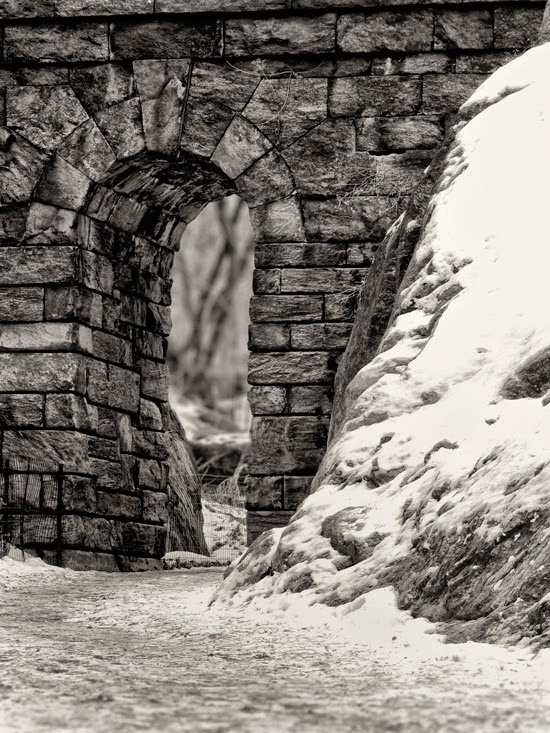 (Apologies to The Mamas and The Papas)

All the leaves are brown, and the sky is gray
I needed to go outside, on a winter’s day
Struggled with socks, sweater, coat; but when all was done and said
Barely had the strength, to just get back into bed…

Please excuse the above bad poetry (actually, it’s a gross disservice to poems to even call it poetry), but I just couldn’t resist. Here in New York City, winter is once again upon us, and along with the season’s cold and inclement weather, for us gimps the winter months are chock full of hurdles and obstacles that the able-bodied need give nary a thought. Simply donning get all of the cold weather gear needed to brace oneself against the chill can prove so damned difficult that the mere prospect of getting out of the house can be daunting all by itself.

In theory, at least, I like winter. The monochromatic palette of the winter months appeals to my black and white aesthetics, and I spent enough years living in Fort Lauderdale (yechh) to know that most human beings look better wearing several layers of clothing. Back in my healthy days I was admittedly something of a clothes horse, my closets brimming with cool duds. When I married my wife I owned more pairs of shoes than she did, and Karen isn’t a one pair for all occasions type of gal. My fetish for shoes goes way back, and my mom likes to tell tales of how, even as a toddler, I would torment shoe salesman by making them haul out box after box of footwear until I found a pair that met my precocious exacting standards. Why my mom allowed the little munchkin me such free reign to terrorize shoe store employees will have to remain a story for another day, but suffice it to say that I think she quietly got a kick out of my shenanigans.

But I digress, the subject at hand is the perils of winter for those of us trying to get through life with uncooperative bodies. Whereas I used to take delight in such winter wear as warm socks, comfy sweaters, and fashionable outerwear, these days all of these items have been transformed into potential instruments of torture. The right side of my body is almost completely defunct – weak, spastic, emaciated and largely paralyzed. My left side is still functional, but is weakening, seemingly by the day. Additionally, the more effort I exert the less functional my left side becomes, and with my fatigue levels at an all-time high my energy reserves leave much to be desired. All of this conspires to transform the formerly simple act of getting dressed into a feat of exhausting contortions, the anticipation of which often makes the thought of getting out of the house an extremely unpalatable option, even though being sequestered away inside my apartment for days and days on end is a recipe for mental malfeasance that also needs to be avoided. Quite the conundrum, then, once the temperature plummets.

During the warm weather months getting ready to go outside is a relatively simple affair, although struggling into a pair of elastic waisted shorts, a pullover short-sleeved shirt, and slip on shoes isn’t nearly as easy as it used to be. Still, even in my current dilapidated state it’s just a few minutes’ tussle and then I’m in my chair and out the door, willfully ignoring the fact that yes, my disease is indeed progressing. Once the temperatures drops below, say, 60°F, things get infinitely more complicated, and the very fact of my distressing physical decline from one season to the next cannot be avoided. Things that were merely difficult to do last year have now become almost impossible, and no amount of denial can paper over this reality.

The first bugaboo to be faced when preparing to venture out of doors all by myself is a pair of nefarious garments called “socks”. With a little effort and ingenuity I can usually get my left sock on without much calamity, but getting on my infernal right sock requires the use of a not so handy dandy device called the “Deluxe Flexible Sock and Stocking Aid” (click here). Basically, this contraption consists of a piece of relatively stiff but flexible material with two long straps attached. The flexible material can be rolled into a cone, on whose skinny end a sock can be scrunched up and pulled over (this miraculous feat is accomplished by my wife Karen the night before I’m due to make an appearance out in the world). In theory, then, a person can place the device on the floor and insert their foot into the wide end, and then by tugging on the straps pull the sock onto their foot using the flexible cone thing as a kind of guide. I’m sure this works quite well if the user has at least some dexterity in their right leg and arm. My right leg below the knee, though, has as much dexterity as a piece of overcooked fettuccine, so using this device is increasingly becoming an exercise in futility. The notion that I’ve become too gimpy to use a device made specifically for gimps thrills me to no end, let me tell you. As does the prospect of facing subfreezing temperatures without the benefit of a pair of warm socks. Sigh.

Next up in the cavalcade of whimsy that has become the process of my getting dressed are pants. Luckily, a couple of years ago I discovered that the Duluth Trading Company was selling fully elastic waisted decent looking trousers, which negated my needing to struggle with buttons or clasps to fasten my pants, which even back then had become nearly impossible. For whatever reason the company no longer offers these garments, but I was wise enough to stock up while the getting was good. If anybody knows of similar apparel currently available, please let me know. As long as they aren’t too, you know, ugly. Amazing how resilient vanity is, even in the face of progressing decrepitude, isn’t it?

After struggling with socks and pants, next in line are shirts and sweaters. Even the pullover variety are getting harder and harder to manipulate (the button-down kind may as well be radioactive as far as I’m concerned), and after struggling into them a somewhat disheveled appearance seems just about unavoidable, as a sleeve or shoulder always seems to be bunched up or stretched out in a way I can’t remedy given my limited amount of nimbleness. I suppose I should be happy that I can still don these garments, but there’s that dastardly vanity thing again. If I have to be a gimp I want to be a fashionable gimp, dammit!

Last comes the horror of all horrors, the winter coat. I used to wear all kinds of cool leather winter outerwear, retro car coats and flight jackets, but though these garments still hang in our closet, getting them on and fastened without assistance has become pretty much impossible. My mother-in-law, who is quite handy with a needle and thread, altered a standard military issue peacoat into a Velcro fastened wonder for me, for which I am eternally thankful. When closed up, the thing looks like any other peacoat, as mom fashioned the coat to make it look like the buttons are still fully functional, and folks are always surprised and tickled when I simply rip it open, which I try to do with a dramatic flourish. Still, getting the thing on and off of my stiff, spastic, and weakened body is no picnic, but I suppose we should be appreciative for whatever good graces still lay within our domain. So, yes, I’m quite grateful for my one-of-a-kind Velcro fastened peacoat. As I once said in a previous post, it’s like haute couture for the disabled.

Jeez, it looks like I just composed an entire blog post about the scintillating topic of my getting dressed. How horrifyingly mundane. Thing is, this freaking disease has made even the mundane a challenge, activities that had previously been taken completely for granted now fraught with anxiety, pushing my physical abilities to their limits and conjuring up a maelstrom of disheartening emotion. While the boundaries of those physical limits grow ever tighter as the disease continues its relentless progression I endeavor to live by the motto “use it until you lose it”, but as the losses mount the limitations imposed by these increasing deficits makes using what’s left harder and harder and harder. A decade ago, even on the coldest day of the year, I could be dressed and out of the house in 10 minutes, max. These days, that ever so humdrum of activities called “getting dressed” takes about 45 minutes at best, after which I’m often quite literally so physically spent that I’d rather get undressed and climb back into bed than go about whatever business awaits me out-of-doors.
But there is life yet to be lived, and with dogged persistence my comrades in arms (weak and spastic arms, but arms nonetheless) and I  forge ahead as best we can, each displaying a quiet steadfastness that should be the fount of much pride, if I do say so myself. I will admit, though, that it’s hard to be prideful when you’re stuck with a sweater half on and half off, the nefarious garment doing its best impression of a straitjacket. Damned disease.

If you’ve made it this far through my long-winded description of getting dressed (egad), you deserve to be rewarded with the following musical delight, a version of The Mamas and The Papas “California Dreaming”, performed by the very underrated classic soul and R&B artist Bobby Womack, who sadly passed away earlier this year. Enjoy…

Posted at 12:52 AM
Email ThisBlogThis!Share to TwitterShare to FacebookShare to Pinterest