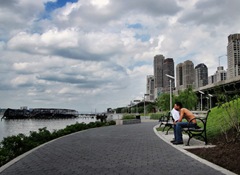 Receiving a diagnosis of MS, or any serious illness, is a reality shattering event. Despite the initial wave of fear, confusion, and consternation, there is one thing the receiver of such news knows innately; life as they know it will very likely never again be the same. Whether the disease eventually takes a mild course, leaving a person relatively intact for an extended length of time, or a more aggressive path, as in my case, landing its victim in a wheelchair within five years, life's future trajectory has been fundamentally altered. If not by the ravages of the disease itself, a patient's reality will be warped by the sudden realization of their absolute vulnerability.

How to deal with this sudden detour is up to the individual, and each person's reactions and coping mechanisms are as different as the ways in which MS can present itself. Some patients go into complete denial, and attempt to live life as if nothing has changed. Others shut down completely, unable to wrap their minds around their new, unfortunate, reality. Reading books, talking to doctors, and chatting on the Internet can only go so far. Ultimately, each individual must make his own peace with the disease. Truthfully, I'm not sure that peace is even the right word. Truce, maybe? Each person must come to a truce with their new reality, must reach an armistice with their illness.

Thing is, even without a diagnosis of MS, no person knows what the future holds. We live our lives with blinders on, blithely going about our routines as if those routines were written in stone, stable and secure and steadfast. Almost inevitably, something comes along to reveal that the underpinnings of our existence are not constructed of granite, but of gossamer. The stability of everyday life is an illusion for us all, healthy or not, and can be shattered in an instant. The loss of a job, a betrayal, an illness or accident, or even a simple lapse in judgment can forever consign all that was previously taken for granted to the scrap heap of what used to be.

When I was first diagnosed, I was working at one of the major TV/video/music production facilities here in New York City. The building was filled with folks who were among the world's best at their highly competitive jobs. Two of the people I was most friendly with there were named David and Bob. David was a flat-out genius, probably the smartest person I've ever met, who was paid a very nice living for simply being David. He was an innovator who helped bring about the digital age of recorded music, and was so well thought of that he was the go to guy when the industry's other big brains had problems that they couldn't solve. Bob was a gentle giant of a man, and as chief engineer of one of the world's foremost production facilities, he was no slouch in the brains department either. In an industry filled with tremendous egos, Bob was humble and grounded, an island of stability in an environment that could often turn into a maelstrom of emotional histrionics.

Upon hearing of my diagnosis, both of my friends were visibly saddened, and through the fusillade of "sorry to hear thats" that came at me from every direction, their compassion was palpable, and comforting. They genuinely felt sorry for me, but I knew from my own experience in dealing with other people's bad news that there was an element of "thank God it isn't me" mixed in with their compassion. It's only natural, as hearing of someone else's misfortune serves as an unwelcome reminder of our own vulnerability, a reminder that we quickly cast out like a container of soured milk. In the reality show of life, even the best of us feels thankful that it wasn't me who was voted off the program.

About three years after I was diagnosed, my friend David suffered a massive coronary after having dinner with his elderly mother. He simply got up from the dinner table, fell over, and that was that. Soon after, Bob was hit with a mysterious illness, and he wound up going on disability a month or two before I did. Through numerous phone conversations, we helped each other wind our way through the labyrinthine process and paperwork of applying for Social Security and long-term disability. Tragically, Bob's mysterious illness turned out to be a rare form of leukemia, and he passed away a little over a year ago. Even now, writing that sentence brings with it a sting of grief.

The point of all of this gloom and doom is that nobody knows what's coming. Life is a road made up of nothing but blind curves. Healthy or not, we must all constantly try to make the most of the present moment. The past is gone for good, and the future is unknowable. All we have is now, and even if this now is not what you once imagined it would be, it is still your most precious possession, because you will never have another one.

Those of us who have suffered loss after loss because of multiple sclerosis must concentrate on that which we still have, and not lose ourselves in all that's been taken from us. I can't use my right arm and leg , but I can use my left. I can choose to grimly lament the loss of what had been my dominant side , or I can try to do the best I can with the parts of me that still work. It's all a choice, and the power and grandeur of the human mind is that it can create its own reality. Being stuck with a miserable disease does not relegate one to being miserable. Without making an effort, the misery of MS is always there to sink down into. Avoiding it takes conscious action, the mental discipline to mindfully take control of your own emotional well-being.

This is not to suggest that one walk around brainlessly smiling like an overly medicated asylum inmate. A large part of the ability to cope with a disease like MS is acknowledging how much having the disease sucks, and then deciding that you will find a measure of contentment in spite of it. It's an effort that must be exerted each and every moment of each and every day, but as with all exercises, with time it becomes easier, and habitual.

My friends David and Bob both felt sorry for me, never expecting that within a handful of years I'd be the last of the three of us to still grace the planet. My life is farther from perfect than I ever expected it could be, but I still have life, and enough ability left to overcome my disabilities. This might not always be the case, but right now, at this moment, it is. Tomorrow, or next week, or next year? Who knows? I can try to plan for the future, but I can only live it when it becomes the now.

Despite multiple sclerosis, we are in the very same boat as our healthy friends and family, trying mightily to navigate uncharted waters with an imaginary map. Rest assured that there are rocks and icebergs and maybe even sea serpents ahead, but the only damage they can truly do to your essence is that which you let them.

Posted at 9:36 PM
Email ThisBlogThis!Share to TwitterShare to FacebookShare to Pinterest