A Patient's Perspective on CCSVI, in Words and Pictures (Part Two)

On July 15, 2011 I was honored to give a presentation at the Patient Information Day of the Second Annual CCSVI Update Symposium, held at the Crowne Plaza Hotel in Times Sq., New York City. The organizer of the symposium, Dr. Salvatore Sclafani, asked me to write an essay for oral presentation on "A Patient's Perspective on CCSVI", using some of the photographs taken from my wheelchair mounted camera to illustrate my talk. I'll post the resulting essay here in four parts, spaced a few days apart. Here's part two (click here for part one): 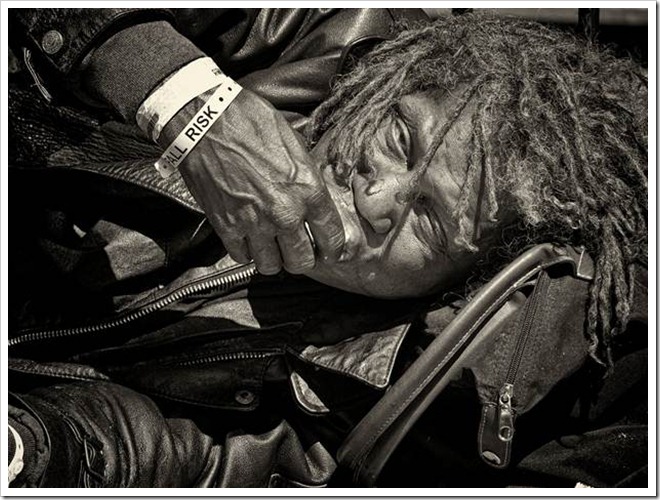 I photographed this poor soul just a few blocks away from Roosevelt hospital, on Manhattan's West Side. Judging by the hospital bracelets on his wrist, he'd obviously been newly discharged. The bracelet warning of his being a fall risk resonates in any number of ways, coming to metaphorical fruition probably within hours of his leaving the hospital.

Patients dealing with multiple sclerosis, or any serious incurable illness, are far too well acquainted with the notion of risk. From the moment of our diagnosis we are bombarded by a befuddling array of new and frightening information and faced with making with grave choices, all of which entail varying degrees of risk. I vividly remember the day of my diagnosis, when, with my head spinning with fear and confusion, I was handed a pile of videotapes and told to go home, watch them, and choose my treatment option. I felt as if I'd been handed citizenship papers to a world in which I never wanted to be part of and for which I had no roadmap or experience to draw on.

My reaction to being confronted with this new path, riddled with pitfalls and landmines, was to intensely educate myself as best I could. I quickly learned that every choice confronting the MS patient is fraught with risk. Doing nothing is obviously risky. There is a reason they call MS a progressively disabling disease. It progresses. The existing mainstream treatment options all carry some degree of risk, ranging from relatively minor flulike symptoms all the way to ghastly and deadly brain infections, and many of these drugs are of questionable efficacy at best.

Now, CCSVI has entered the picture. What at first seemed like a relatively simple hypothesis, with a relatively simple solution, has turned out to be more complicated than most expected. Instead of arcane and impossible to understand ideas about autoimmunity, many of which sound like bullshit because they very likely are, CCSVI postulates that MS is the result of disrupted blood flow through the central nervous system, a relatively easy idea to wrap your brain around. Likewise, its treatment, the opening of blocked veins through a minimally invasive procedure also seems relatively simple when compared to traditional MS therapies, all of which ominously tinker with the workings of the infinitely complex human immune system.

Unfortunately, things are turning out to be not quite as simple as first hoped. As research into CCSVI has picked up, we've been confronted with a sea of sometimes contradictory findings. The CCSVI treatment procedure itself is a work in progress, with many treating physicians reporting a surprisingly steep learning curve required to master the procedure. The techniques being used are undergoing constant refinement, with no standard of practice fully agreed upon by all of the physicians currently involved in treating CCSVI.

Please don't misunderstand me, I fully believe that there is merit to CCSVI, and that its treatment has the potential to help a significant portion of the MS population, but once again, in considering whether to undergo CCSVI treatment, the MS patient is confronted with the weighing of risk. Not all patients are helped by treatment, and those that are helped often find the benefits they receive only temporary, requiring them to undergo multiple procedures to maintain their perceived gains. A small percentage of patients suffer potentially serious side effects, including blood clots and the formation of scar tissue in their veins. There's also the cost of the procedure to consider, which can be substantial if not covered by insurance, the expenditure of which brings no guarantee of success.

It's vital that every MS patient considering any new treatment to honestly tally their own unique risk/reward calculation, and the only way to properly do this is to self-educate with all blinders off. When it comes to making decisions as vital and controversial as to when and whether to undergo CCSVI treatment, I've often found more value in listening to and understanding the opinions of those you don't agree with than to those you do. A truly well-informed patient should be intimately familiar with both sides of every argument regarding their own care and treatment.

Posted at 7:06 PM
Email ThisBlogThis!Share to TwitterShare to FacebookShare to Pinterest