Me, In Front Of The Camera (Yikes!) 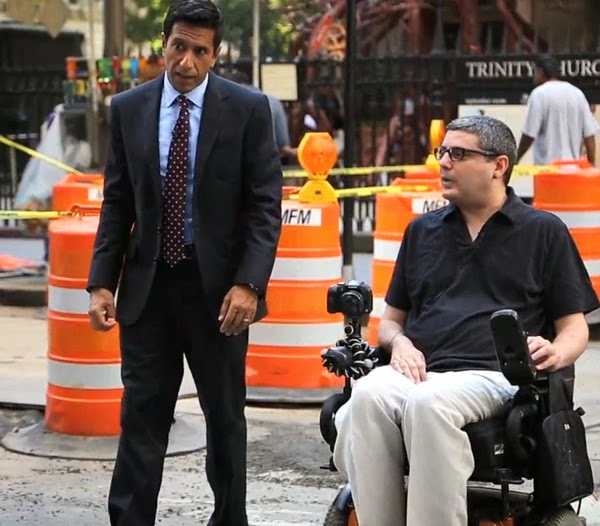 As is evidenced by the Wheelchair Kamikaze videos and photos that are part of this blog, I’m very comfortable behind a camera. In front of a camera, though, not so much. This might seem strange given the fact that I don’t have much of a problem “revealing” myself through my writing, and I’m not exactly a shrinking violet, but I usually react like I just got too close to the tail end of a flatulent moose when viewing images of myself or hearing recordings of my voice. Many so-called primitive cultures believe that capturing a person’s image or voice steals a bit of their soul, and on the off chance that they’re right I’d much rather be the thief than the thieved. You can never have enough soul whether you're talking about things mystical or musical, and anyone who knows me can tell you that I just can’t get enough of that funky stuff. Holla!

Be that as it may, last summer I was contacted by a producer from the website EverydayHealth.com (click here), who wanted to know if he could put together a video for the site featuring me and my blog. As an added incentive, I was told that I’d be interviewed on camera by none other than Dr. Sanjay Gupta, a famous doctor and television personality who makes numerous appearances on CNN, CBS, and other media outlets. Dr. Gupta is also a practicing neurosurgeon, which further piqued the interest of this “atypical” MS patient. Additionally, I was told that Everyday Health wanted the video to include my lovely wife Karen, who deserves as much praise and credit as can possibly be heaped upon her. So, given this ever enticing witch’s brew of enticements, how could I say no?

Shooting the video took two days, or eight months, depending on how you look at it. Late last August – on my birthday, as luck would have it – Karen and I met Dr. Gupta and his video crew in lower Manhattan near Wall Street, where the good Doctor interviewed me as we walked/rolled along the city streets, talking about what it's like to use a power wheelchair in the crowded metropolis. Since time was short, we made plans to finish the video sometime in the next few weeks. My big fat rat bastard of a disease then reared its ugly head when I had a bizarre and totally unexpected reaction to a medication called Acthar Gel, which had me laid up in bed until the end of November (click here). By that time winter had set in and we decided to put off finishing the video until better weather arrived in the spring. Shooting was finally completed in May, and Everyday Health posted the edited video and a much too kind accompanying article on their Internet site a few weeks ago (click here).

Despite the fact that I may have lost a few bits of soul to the production, I think the Everyday Health crew did an exceptional job on the video and the written piece that goes along with it, the combination of which had me blushing for days. I’d like to give my heartfelt thanks to Dr. Sanjay Gupta, producer/writer Nils Kongshaug, and videographer/editor Michael Bush for doing such a bang up job on the entire production. Truly, I am not worthy (but Karen is)…

Posted at 11:41 PM
Email ThisBlogThis!Share to TwitterShare to FacebookShare to Pinterest