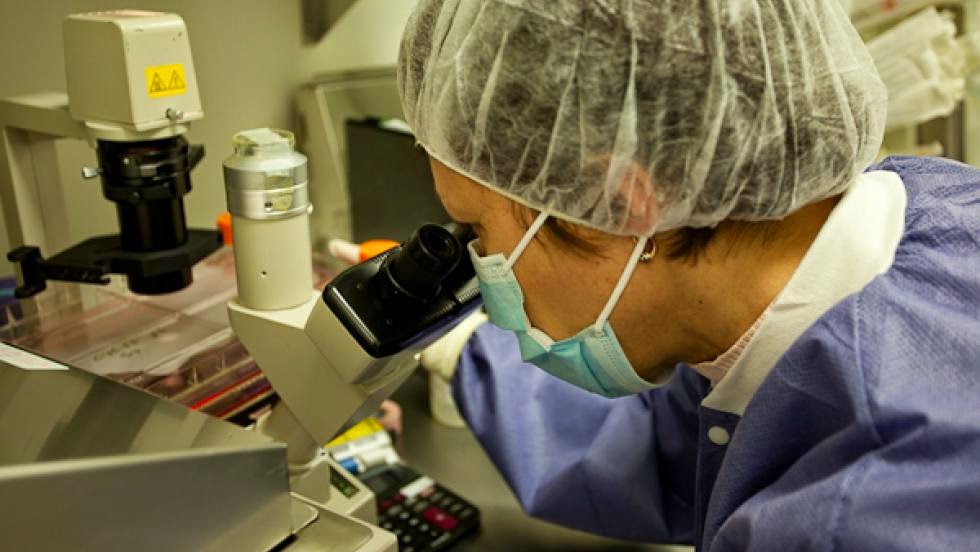 Progressive multiple sclerosis is a particularly horrendous and intractable illness. Unlike the relapsing remitting form of the disease, for which there are currently 12 approved treatment options (however imperfect these may be), there is tragically little available for progressive MS patients (one very flawed treatment option for SPMS and none for PPMS). At the recent American Academy of Neurology meetings, held last week in Washington DC, some rays of hope for progressive MS finally shone through, among them studies done on honest-to-goodness human progressive MS patients – as opposed to those done on mice or in test tubes – that show particular promise.

As I’ve written about extensively (click here ), the Tisch MS Research Center of New York is currently conducting the only FDA approved regenerative human stem cell trial on MS patients in the United States. Yes, this is the very same study that the National Multiple Sclerosis Society has repeatedly refused to fund (click here). Though this phase 1 trial is not yet complete, interim results were released at the AAN meeting, and they look impressive.

Of these nine patients, seven displayed some form of disease improvement. Six of these seven patients suffer from SPMS, and one from PPMS. Based on neurologic exams, five of these seven patients displayed improved motor functions, including better balance, increase muscle strength, and improved ambulation. Six of the patients reported better bladder function. No significant adverse events were reported. Here’s a graphic detailing the Tisch Center stem cell trial results on a patient by patient basis, taken from the poster presented at the AAN meetings. To view the full poster, please (click here). 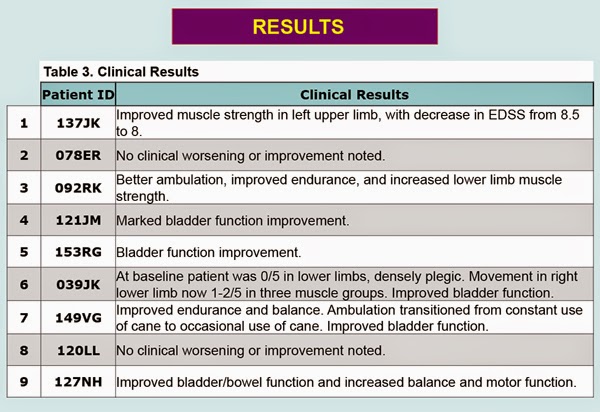 While exciting, it’s important to keep these results in perspective. We’re looking at a very small patient population taking part in an early phase 1 trial whose primary endpoint is establishing the safety of the treatment. That said, given the intractability of progressive MS, seeing any significant improvement is extremely encouraging, and these early results certainly validate the approach to regenerative stem cell therapy being taken by the Tisch Center.

Alarmingly, though, the Tisch Center is now facing a fund-raising crisis that threatens to impede the phase 2 extension of this study, as well as much of the other groundbreaking MS research currently underway in the Tisch laboratories. In previous posts I’ve expressed my extreme distress at the NMSS’s repeated refusals to fund research being done at the Tisch Center, and due to unforeseen circumstances the Center’s funding shortfall is now being felt quite acutely. The animal research laboratory used by Tisch Center scientists is being closed as a result of the sale of the hospital in which it’s located (only a block away from the Tisch MS Center), leaving the Center with no viable alternative other than constructing their own facility, which will require a massive fund-raising effort.

Since I’d rather this post concentrate on the research itself, I urge all readers to click here for more information regarding this fund-raising crunch, and to spread the word far and wide. While the Tisch Center is actively conducting the only current FDA approved MS stem cell trial on human beings, the NMSS funds preclinical stem cell experiments being done in test tubes and on mice that, even if spectacularly successful, won’t reach MS patients for more than a decade. Just saying…

(Full disclosure: I am a patient at the MS clinic directly associated with the Tisch MS Research Center of New York, and my MS as well as other physical ailments have been totally kicking my ass lately. So, yeah, I might take this crap just a wee bit personally.)

Another much-anticipated study presented at last week’s AAN conference provided yet more hope for progressive MS patients, though perhaps not as much as originally anticipated. The French pharmaceutical company MedDay released the results of a stage III clinical trial involving the use of massive doses of Biotin to treat patients with Primary Progressive Multiple Sclerosis (PPMS) and Secondary Progressive Multiple Sclerosis (SPMS).

Biotin (vitamin B7, also known As Vitamin H or Coenzyme R) has been used in much lower doses as an over-the-counter “nutraceutical” supplement to treat brittle hair and nails, some skin conditions, and neuropathy brought on by type II diabetes, among other applications (click here). Biotin is known to be necessary for cell growth, the production of fatty acids, and the metabolism of fats and amino acids (click here).

A small pilot study researching the use of high doses of Biotin to treat MS was conducted by MedDay starting in 2013. This initial study produced astounding results, with 91.3% of the 23 progressive MS patients involved displaying improvements in their neurologic condition (click here). This small, unblinded, non-placebo-controlled trial created much excitement, leaving patients and researchers awaiting the results of a much larger placebo-controlled phase 3 trial, which was completed in late 2014. The results of this phase 3 trial were presented at the AAN conferences on Friday, April 24, 2015.

In this late stage study, conducted at 19 centers around France, patients were given 300 mg of Biotin per day, which is the equivalent of approximately 10,000 times the maximum daily recommended dosage. The study involved 154 patients, 103 given Biotin and 51 given a placebo. The results of this study (click here), while positive, don’t appear to be nearly as compelling as had been anticipated based on the early pilot study results.

The results of MedDay’s late stage study revealed that after 12 months, 12.3% of the Biotin treated patients displayed a verified improvement in disability scores, as opposed to 0% of the placebo group. Secondarily, 4% of Biotin treated patients displayed disease progression after one year, versus 13% in the placebo group. Very few adverse events, all considered non-serious, were reported. While these numbers pale in comparison with those seen in the initial pilot study, they still represent a breakthrough of sorts in treating advanced progressive MS, which thus far has defied almost all attempts at treatment.

Looked at another way, about 1 in 8 patients treated with Biotin saw their disability scores improve, while 1 in 25 saw their disease progress. Interestingly, only 1 in 8 (I’m using ballpark figures here) untreated patients experienced disease progression. While these aren’t the kind of results many hoped for based on the early Biotin study results (9 in 10 patients experiencing neurologic improvement), they are still better than nothing, which is what mainstream medicine currently offers patients with advanced (non-relapsing) progressive MS.

Given these factors, many patients with progressive MS (myself included) have expressed great interest in giving Biotin a try, especially since the stuff is readily available in over-the-counter form. The highest dose capsules commercially available are 10 mg, meaning that a patient would need to take 30 capsules a day to replicate the doses used in MedDay’s trials, which administered 100 mg of biotin three times a day. There are a few serious problems with this approach, though, above and beyond the huge amount of capsules that would need to be ingested to replicate the doses used in MedDay’s trial.

First, the compound used in the MedDay trial is a highly concentrated and purified pharmaceutical grade form of Biotin called D-Biotin, a stereoisomer of Biotin that is extremely bioavailable (easily absorbed by the body) and contains active enzymes (click here). This type of Biotin is generally not available in over-the-counter capsules. Second, over-the-counter nutraceuticals are completely unregulated, and it’s almost impossible to know the purity of the compounds contained within the capsules or what other ingredients might also be present. One study found that a shocking one third of herbal supplements tested contained not a trace of primary ingredient the listed on the bottle (click here)! Additionally, some Biotin supplements contain calcium, which if taken in greater amounts can cause hypercalcemia, a potentially very serious medical condition (click here).

After consulting with a naturopathic physician, I'm looking into procuring ultra high grade, USP certified (click here) D-Biotin from a reputable wholesaler and having it put into properly dosed capsules through a compounding pharmacy (I'm doing this with my naturopath's help, of course, and will need a prescription in order to get the drug). While this approach is likely to be much more expensive than using over-the-counter product (probably about $300-$400/month), it will offer the best chance at replicating MedDay’s trials, and would certainly eliminate the vast uncertainties involved in consuming huge quantities of over-the-counter nutraceutical supplements.

So, there you have it, two clinical trials targeting progressive MS in very different ways, but coming up with encouraging results to one degree or another. While the Tisch Center stem cell therapy is still in early trials and is at least several years away from moving from the experimental stage to general clinical use, MedDay’s Biotin compound should be ready for FDA approval by the end of this year, and highly motivated patients might try to get a head start on things by taking matters into their own hands. Although the results of MedDay’s late stage phase 3 trial were a bit underwhelming, they do represent an important advance over the status quo, and many progressive MS patients are well past the “any port in a storm” stage.

As mentioned above, though, please take caution if you plan on going the over-the-counter Biotin route. Here’s a video featuring the terrific John Oliver explaining in his usual brilliant and sardonic fashion the pitfalls and perils of placing your trust in the nutritional supplements industry. If you are planning on trying over-the-counter biotin in the quantities required by the MedDay trial, this is an absolute must watch:

Posted at 10:05 PM
Email ThisBlogThis!Share to TwitterShare to FacebookShare to Pinterest