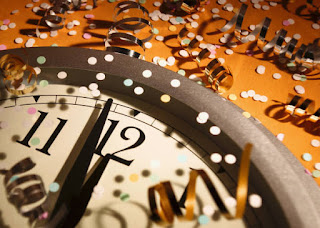 (This essay was first posted about one year ago. Guess this makes it a golden not so oldie, but it's timely and the sentiments expressed will hold true as long as MS remains my unwanted life partner…)

Back in in the days before I got jumped by MS I always loved New Year’s Eve. While many of my fellow habitual night crawlers derided the night’s festivities as “amateur’s hour”, a time when those less accustomed to nocturnal hijinks were apt to get sloppy and make fools of themselves, I embraced the ringing in of the new year con mucho gusto. Never content with just one party for the duration of the night, my friends and I would go on a kind of New Year’s Eve tour, hitting four or five shindigs and nightclubs before heading home well after dawn on January 1. The sentimentality of the holiday, with its tacit promises of sins forgiven and futures bright with hope held me in its thrall, for though I seemed to live in a state of perpetual neurotic dissatisfaction, I also brimmed with expectations that bigger and brighter days were waiting just over the horizon. New Year’s Eve was the one night a year that this heady brew of emotions and expectations were codified into celebration, to be shared with friends and strangers alike.

I suppose my fondness for the holiday has its roots in my early childhood. My mom and dad divorced when I was three, and for several years after the split my mom and I lived with my grandmother and my unmarried aunt. On New Year’s Eve my young, single mom – who herself loved the nightlife – would head out with her friends into the NYC of the swinging 60s, and my grandmother, aunt, and I would watch Guy Lombardo and his Royal Canadians playing old timey big band hits for the well-heeled crowd at the Waldorf Astoria Hotel, broadcast live to our ragged black and white console TV. We didn’t have much money and lived in a building in the Bronx that was closer to a tenement than a high-rise, but our lack of means did nothing to diminish the excitement and expectations of the evening.

Though I was maybe only four or five years old, on New Year’s Eve I was allowed to stay up till midnight to take part in a family tradition that stretched back decades. We didn’t have any fancy noisemakers or horns, but at the stroke of midnight, as confetti and balloons floated down on the well to do at the Waldorf and Guy Lombardo’s boys played “Auld Lang Syne”, my grandmother, aunt, and I grabbed sturdy but well-worn metal pots and pans, and, using big spoons as drumsticks, burst into the hallway of our apartment building, banging with joyous intensity on those old, scarred cooking implements, creating a raucous racket and shouting at the top of our lungs “Happy New Year’s!” Most of the other residents of the building joined us in creating a jubilant and low rent but somehow defiant cacophony, delirious and intoxicating stuff for the very young me. I daresay that for those few moments we had a lot more fun than the swells at the Waldorf.

Despite my best efforts to stay fixed in the moment, I soon found it impossible to watch millions of people celebrating without enviously contrasting their situation with my own. With nary a thought given to their tremendous good fortune at simply having limbs and senses intact, the televised multitudes danced and sang, drank and strutted, laughed and hugged and mingled and voiced exuberant expectations about a future brimming with possibilities. Lubricated by flowing booze and the magic of the night, all could convince themselves that the coming days held good fortune that would far eclipse those which now belonged to history.

For the healthy masses, New Year’s Eve encapsulates the reality that the future is but a blank canvas, the images to be painted on it not predetermined but subject to the will of each individual. All but the most intransigent of difficulties will give way to effort, ingenuity, and discipline. Reality is but a construct of the human mind and the emotions it creates, and as such can be born anew once the self-defeating habits of the past are no longer allowed to dictate actions in the present. Not that these kinds of changes are easy, but with sound body and mind anything – anything – is possible. Sadly, it took my getting sick for me to fully understand this, but there is no greater truth.


Unlike those healthy New Year’s Eve revelers on TV, no amount of willpower or change of habits will arrest this bitter physical decline. I continue to fight my disease on all fronts, employing a dizzying array of supplements and medicines to lessen the impact of some symptoms, and undergoing treatments both holistic and traditional at which my condition seems simply to sneer. Though for the most part my spirit stays strong, in the face of this insidious physical onslaught and its accompanying indignities I find it impossible to not at times give way to the weight of it all, having my breath taken away daily by the shocking realization that this is no dream that I can wake from, but instead a concrete reality in which I am being forced to watch myself slowly wither away. My mantra of “staying in the moment” does still help to keep me grounded, but there are also times when the moment just sucks, no two ways about it. Though I can and do fantasize about a future free from illness, my utter conviction to stare this bastard straight in the eyes lands such fantasies well into the realm of the far-fetched, right there alongside my old dreams of becoming the next Mick Jagger or Philip Roth.

And even as I sat there watching the partiers on TV, wrestling with my complicated and disconcerting mass of emotions, when the clock struck midnight I chugged some champagne and kissed my wife, while my inner five-year-old banged on pots and pans and screamed at the top of his lungs, “Happy New Year’s!”…

Posted at 2:46 AM
Email ThisBlogThis!Share to TwitterShare to FacebookShare to Pinterest